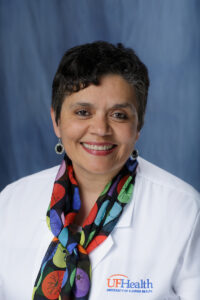 Maria de Lourdes (Malú) was born in El Paso, Texas and attended Loretto Academy high school. Dr. Tansey obtained her B.S/M.S in Biological Sciences from Stanford University and her Ph.D. in Cell Regulation from UT Southwestern in Dallas, TX followed by post-doctoral work in neurorscience at Washington University Medical School. Prior to setting up her academic research lab in 2002 at UT Southwestern Medical Center in the Department of Physiology, she was head of the Chemical Genetics group at Xencor, a biotechnology company in Monrovia, working on novel TNF inhibitors that she used as tools in academia to investigate the role of neuroinflammation in neurodegenerative disease and which have now advanced to clinical trials in Alzheimer’s disease and COVID19 for cytokine storm.

After becoming a tenured Associate Professor of Physiology at UT Southwestern in 2008, Dr. Tansey was recruited to Emory University in Atlanta, GA by the Department of Physiology where she became a member of the Center for Neurodegenerative Disease (CND) and also served as Senior Director of Graduate Studies (DGS) for the Emory Neuroscience Graduate Program and a member of the Executive Committee of the Emory Immunology and Molecular Pathogenesis (IMP) Graduate Program. While at Emory, she catalyzed multiple initiatives to expand and coalesce neuroinflammation efforts across the medical school and helped establish the Center for Neurodysfunction and Inflammation (CNI) at Emory in 2018.

In 2019, she was recruited to the University of Florida to be Director of the Center for Translational Research in Neurodegenerative Disease (CTRND) and the first endowed Norman and Susan Fixel Chair in Neuroscience and Neurology at the University of Florida.Today, Tansey’s lab employs multi-disciplinary approaches to investigate the role of inflammation and immune system responses in brain health and the development of neurodegenerative diseases with particular focus on the gut-brain axis . Her long-term goal is to train the next generation of scientists who can/and to develop better therapies to prevent and/or delay these disorders.

As a Hispanic American, Dr. Tansey has served as a role model to numerous undergraduate, graduate and post-graduate trainees, many of them women from under-represented groups in STEM. She served as Co-Director of Emory’s R25 Initiative for Maximizing Student Development (IMSD) whose mission is to strengthen institutional efforts to enhance recruitment and retention of diverse student and faculty bodies at Emory, by providing research training and mentoring opportunities to both. Dr. Tansey is a fierce advocate for women and other under-represented groups in STEM and has earned several mentoring awards from students and faculty for her efforts in this area.